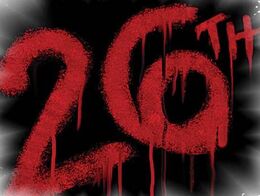 Eikosihexaphobia (from Greek eikosi, "twenty", and hexa, "six") is the fear of the number 26. This fear of number may be logical because 26 is obtained by doubling the unlucky number 13, therefore doubling the potential for bad luck. But the main origin for the fear of 26 is that numerous deadly disasters take place on the 26th of the month. One Twitter user said in regards to the unfortunate events taking place on the 26th, "Number 26 has a bad history, majority of the bad and sad incidents in World happened on this date. 26? Unlucky for? #MysteriousNumber". In conclusion, date number 26, not 13, is the unlucky date.

Community content is available under CC-BY-SA unless otherwise noted.
Advertisement